The 2018 Midyear meeting, held July 20-23 at Old Sturbridge Village (OSV), was, by common acclaim, one of our very best.

Blessed with an outstanding venue, an exceptional roster of presenters, two “once-in-a-lifetime” museum tours, and even great weather, everyone went home happy. Credit goes to Bob Van Dyke, who rescued SAPFM from near disaster—and the possibility of no Midyear for 2018—when the original venue proved impossible at the eleventh hour. Taking advantage of the location so close to Boston, Bob was able to assemble a package that will be very hard to top. 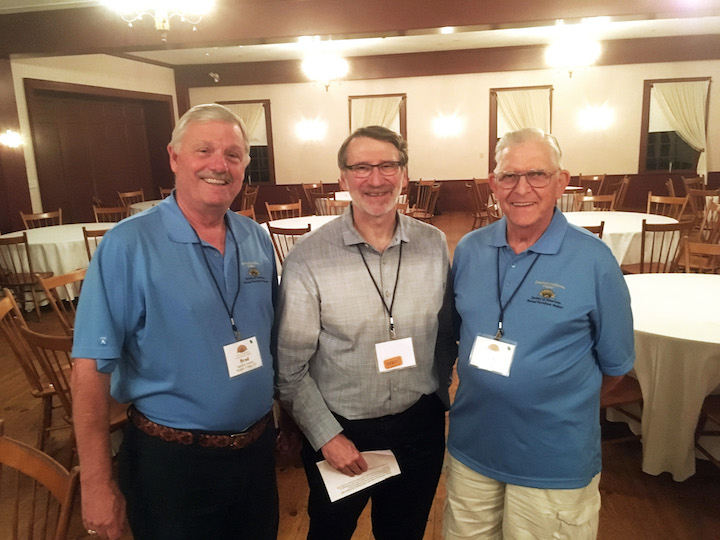 Brad and Bob with Norm AbramThe event began Friday with a tour of the new American galleries of the Boston Museum of Fine Arts (MFA). The period furniture collection is great, but what made the tour special were the “special docents” present in the galleries. Cartouche winner Al Breed was in the Rhode Island gallery to talk about Newport furniture. Author, restorer and John and Thomas Seymour expert Robert Mussey was in the Seymour gallery. MFA Lynch Curator of American Decorative Arts and Sculpture, Art of the Americas Dennis Carr was in the gallery showcasing South and Central American period furniture and Senior Curator of American Decorative Arts and Sculpture Emeritus Gerald Ward rounded out the cast of experts by examining the furniture in the Design and Construction gallery. In the afternoon, Curator Nonie Gadsen took extra time to look at the newly acquired Nathan Lumbard clock, while Dennis Carr and Al Breed took members through the 17th-century gallery.

Friday evening, after a fine meal provided by OSV, the keynote speaker was television craftsman Norm Abram, who spoke to the group about the “This Old House” initiative “Generation Next,” aimed at encouraging young people to enter the building trades. Norm also had lots of stories about his getting started with PBS on “This Old House” and the “New Yankee Workshop.”

On Saturday we had the traditional three rotations with the group divided so that everyone had a chance to see and ask questions. Al Breed demonstrated Newport carving, doing shells and a ball-and-claw foot. Phil Lowe demonstrated ways to make a number of Seymour bandings and other Boston details. Will Neptune talked about his recent research into the geometry Eliphalet Chapin used to develop the design of his iconic Connecticut high chest. The research is published in Chipstone’s 2018 volume of American Furniture. It was a lot to absorb but a fascinating subject well appreciated by most members.

Al Breed"...what made the tour special were the “special docents” present in the galleries."

The Saturday rotations also featured a new element. Between each rotation there was a general session for all attendees. The first of these featured Jennifer Anderson, author of Mahogany: The Costs of Luxury in Early America (Harvard University Press, 2012). She spoke about her new research on the mahogany trade. Between the second and third rotations, researcher and conservator Randy Wilkinson spoke about identifying wood species in period furniture and on his recent research into identifying Newport furniture that was previously identified as mahogany but is actually one of three other species. It raised interesting questions of how these other species of lumber happened to be in Newport at that time. His approach was very down-to-earth and much less esoteric than many talks on this topic. Attendees agreed that it was much more useful to the layperson.

After dinner, Winterthur curator emeritus and author Brock Jobe spoke about the new initiative to reopen a cabinetmaking shop in Old Sturbridge Village after an absence of almost 40 years. Brock had the model of the new shop, due to open in 2021, and talked about the campaign to fund the project. OSV has already opened a temporary shop in another building and has begun part-time period furniture-making demonstrations.

On Sunday morning, all three Saturday presenters gave wrap-up presentations. Brock Jobe and co-author Christie Jackson spoke about their research on Sturbridge cabinetmaker Nathan Lumbard (1777–1847), the subject of their recent book, Crafting Excellence: The Furniture of Nathan Lumbard and His Circle, published by Winterthur Museum and distributed by Yale University Press, 2018. 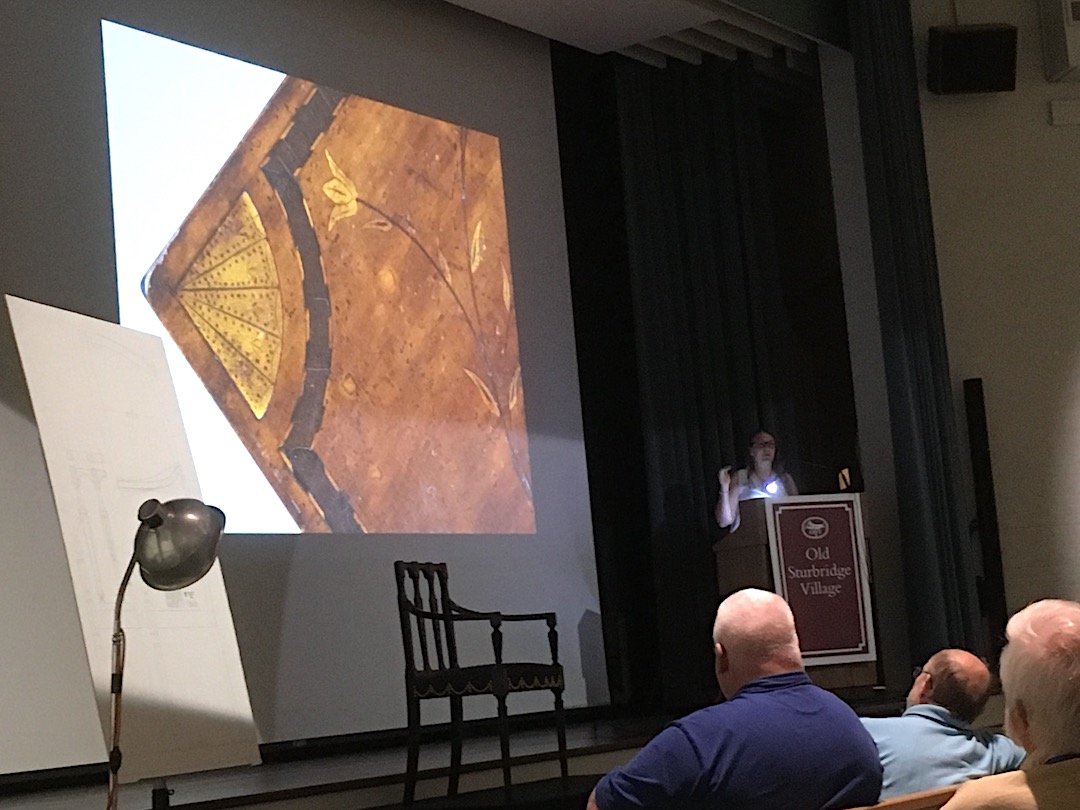 Christine SkeaksAfter lunch on Sunday, we continued the new tradition, begun at Thaddeus Stevens two years ago, of optional additional rotations. Brock Jobe led a tour of the OSV storage facility to view furniture not on regular display. Dan Santos demonstrated creating moldings with scratch stocks and upholsterer Mike Mascelli discussed options for period-appropriate upholstery for reproduction furniture as well as the importance of preserving the upholsterer’s trade. Matt Bickford demonstrated making moldings with hollows and rounds. Michael Wheeler discussed his research into “patriotic bandings,” those bandings and paterae that were actually done with red, white, and blue dyes, and demonstrated his techniques of making “branded” rather than sand-shaded paterae. All these presentations were well received, and the Sunday afternoon format will, like the Saturday group-wide general sessions, become a regular feature of future Midyear conferences.

The "behind the scenes" tour at OSV gave SAPFM members the unique opportunity to view furniture rarely on display to the public.

On Monday, a smaller group traveled to Salem, Massachusetts, to the Peabody Essex Museum. The museum is closed to the public on Mondays, but it opened for our group at the request of Phil Lowe, who has done much of the conservation work in their collection. Phil led the group through the galleries discussing various pieces in the collection, many, if not most of which, he has worked on. It is a tribute to the growing relationship SAPFM is developing with several top museums that we can get this kind of access both at Peabody Essex and the Boston MFA. We have enjoyed similar access at the Museum of Early American Southern Decorative Arts (Mesda) and Winterthur.

“The Midyear has become SAPFM’s signature event and every member
should try to take advantage of this special gathering.” 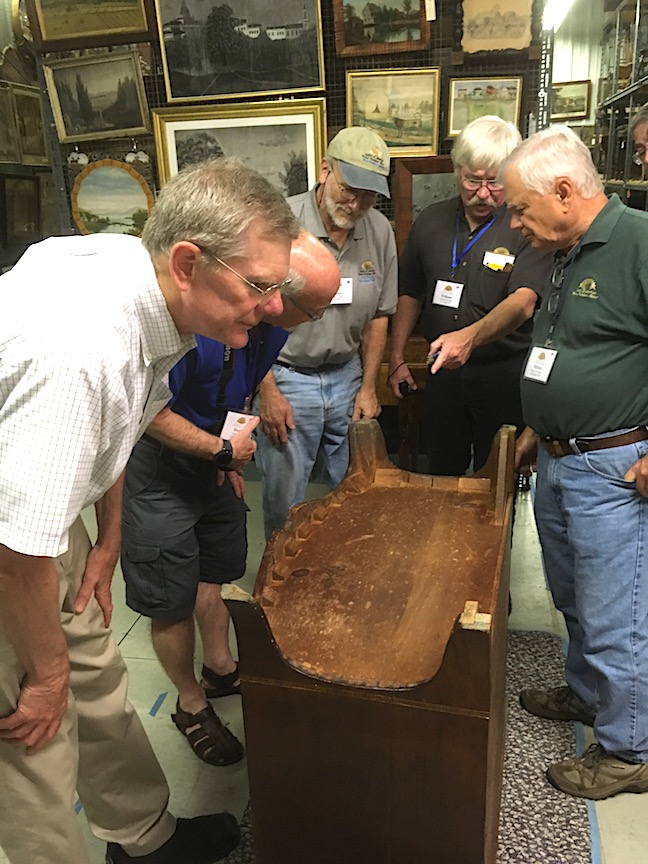 Brock Behinf Behind the ScenesIn the afternoon we traveled to Phil’s shop in Beverly, Massachusetts. Phil demonstrated the construction of a multipaned, barred cabinet door, the subject of his recent article in Popular Woodworking Magazine.

That concluded a busy, valuable conference that combined lots of information with an opportunity for SAPFM members and their spouses to get together, share their current woodworking projects, and generally catch up.

Next year we will meet in Greenville, South Carolina, in July. The program is in development.

SAPFM owes a special debt of gratitude to Bob Van Dyke for almost a year of work to make this event happen, and to Old Sturbridge Village for providing an ideal venue together with excellent meals and hospitality. The Midyear has become SAPFM’s signature event and every member should try to take advantage of this special gathering. —RM