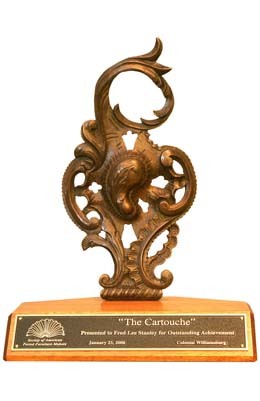 Each year, the Society of American Period Furniture Makers recognizes an individual whose achievements best reflect the mission of SAPFM. The Cartouche Award is SAPFM's way of acknowledging the contributions made by craftsmen, educators, conservators, and supporters, professional or hobbyist, who have inspired or instructed others, or who have simply made the world more pleasing as a result of their skillful labors. Each year, the recipient of the award is honored at the Cartouche Award banquet, held in conjunction with Colonial Williamsburg's annual conference Working Wood in the 18th Century.

The idea of presenting an award to recognize excellence in period furniture making was inspired by college football's Heisman Trophy, given annually to award outstanding performance in the field.

The actual cartouche from which the bronze is cast crowns a Philadelphia tall case clock built by Gene Landon. The bronze, weighing close to five pounds, is cast by Dana Stewart in Lambertville, NJ. An individualized brass plaque is acid-etched to raise the shell and text, while the background is textured and painted. The bronze cartouche and brass plaque are then mounted to a mahogany base made by Mickey Callahan.

Do you know someone who should be considered for the Cartouche Award? Read the Guidelines for nominating a candidate.

How The Selection Process Works

The overall process takes place from early summer until late October. An email announcement is sent to all members announcing the upcoming time period for submitting candidates for consideration. It is also posted on our website, and at the mid-year conference the SAPFM board and president encourage members to consider their own submission or others that might be good candidates. Many of our recipients have been nominated and encouraged by friends who recognize the talent of fellow members or someone in the woodworking community at large.

Around July 15, Steve Latta is ready to receive and process submissions. We have a well-defined submission package layout and we require that submissions adhere to that format for several reasons. It makes it simple to determine if  all the desired material is included and we place limits on documents and number of photographs to avoid overwhelming our judges.

Any maker or individual who has had a significant impact on the craft and the techniques used is eligible, SAPFM membership is not required. The only requirement is that they have a lifetime of achievement and “have simply made the world more pleasing as a result of their skillful labors.” Most recipients of the Cartouche have said they did not feel worthy or that their work was not special. Most of our winners are truly humble people doing what they love, whether they are professional or hobbyist.

Anyone can nominate a candidate or a person can nominate themselves. If someone nominates another person, they must have their permission. From a practical point of view, it isn't possible to nominate someone else without their cooperation since background information and photographs are critical.

When Steve gets the material, he confirms that all requirements have been met. All submissions must be in our hands by September 1. Submissions must be on a disc or other form of digital storage and be mailed. They cannot be submitted via email, web sharing or any other cloud based method. At that time, Steve collects all the submissions and forwards them to Ken Johnson who distributes the material to our seven judges.

Neither Steve nor Ken have any say in the selection of the winner. They merely facilitate the processing of nominations. In the past we have had a few as two candidates and as many as six. We  encourage as many people to participate as possible and a typical candidate is nominated in more than one single year.

Documents and forms are available online at: https://www.sapfm.org/cartouche-award-guidelines

The selection is performed by volunteers who come from backgrounds in woodworking, academic, professional, museum, and previous Cartouche winners. Most of our judges have been makers of furniture at some point in their career, but not all. All are heavily involved in the making, study, care or appreciation of quality period furniture.

Judges may serve a maximum of seven years. Their tenure is staggered so we only have one or two leaving the committee any given year. The judges are given a minimum of 10 days to evaluate all the submissions, then a scheduled conference call takes place. The purpose of the conference call is to have the judges share their impressions and opinions of the work of each individual. This is an information sharing call. No attempt is made to convince another or to debate. We want to expose the judges to different ways to evaluate each applicant. We encourage the judges not to have individual conversations with other judges outside the conference call.

If a judge is not able to participant on the call, then they may not vote. The reasoning here is that each voting judge will have the same information when making their decision. If a judge was not on the call, they would not have the benefit of the observations of other judges.

After the conference call, a secret electronic vote is conducted. Steve and Ken only know the results of the voting, not how any individual voted. If there is a tie, then we have a runoff of the top two candidates. We notify the SAPFM president who tells all the applicants the results. We then notify the judges and prepare an announcement for the SAPFM website. A brief article about the recipient is published in the winter Pins & Tales newsletter.

In January, the recipient is honored at the Cartouche Award banquet, held in conjunction with Colonial Williamsburg's annual conference Working Wood in the 18th Century. The following year an article about the recipient, and an article by the recipient is published in American Period Furniture, the annual SAPFM journal.