The SAPFM Florida Chapter held its fall meeting on Saturday, September 22, 2018, at the Florida School of Woodworking in Tampa, FL. We sincerely thank Kate Swann, the executive director of FSoW, for the use of her facilities. It’s an ideal venue for SAPFM meeting with demonstrations. We had 25 members and guests in attendance for this one-day event.

We have 2 meeting a year, spring and fall. For the spring meeting we invite an outside speaker, generally from the ranks of SAPFM. Seldom do we have problems having speakers not willing to travel to Florida during spring break. The Fall meeting features presentations by our Florida chapter members. This time we had three speakers.

We stated the meeting off with Show and Tell. Exhibits included a pair of federal period knife boxes by Pete Savickas; an abrasive organizer and a 2-drawer walnut nightstand with Sheraton turned and beaded tapered legs by John Goyer; a small Federal Period pedestal table by Craig Aebli, a quarter round side escapement plane constructed of beach by Joe Kunzman; and a collection of 4 religious carvings by James Sturgeon. Our host, Kate, then gave us a tour of the school’s shop facilities. She also told us about upcoming classes relevant to period furniture making. 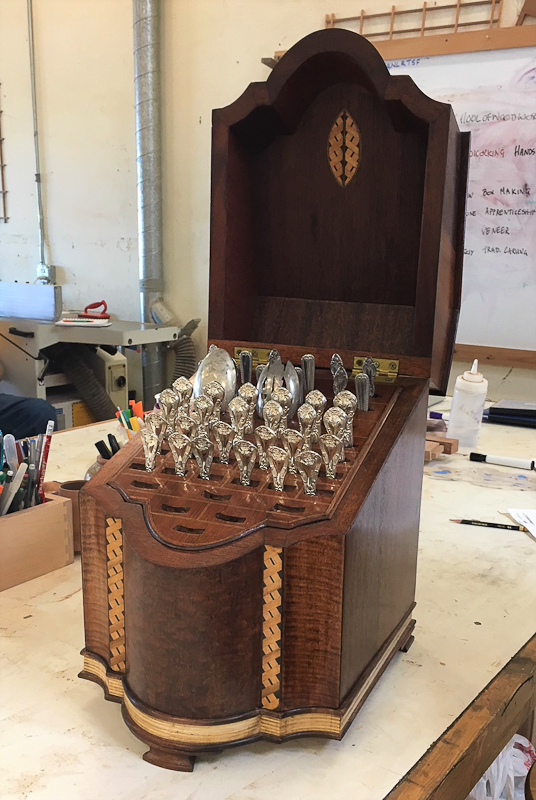 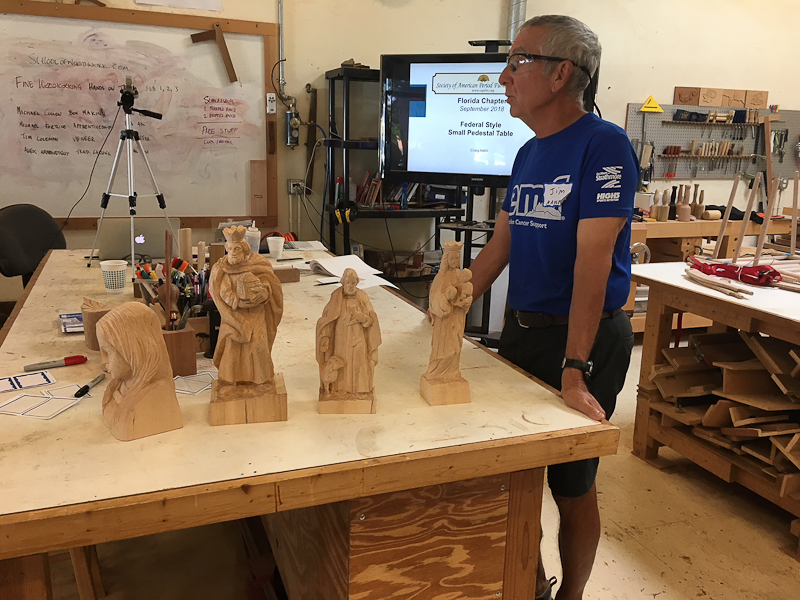 Presentations started off with Craig Aebli’s construction of a Federal Style Small Pedestal Table. This was based on candle stand tables with a veneered top and decorative inlay. It was also inspired by Robert Millard’s Federal Inlaid Candle stand. Craig described the process for turning the center post and shaping the legs out of mahogany. Each leg was dovetailed into the turned post. The table top was veneered over a poplar core using hide glue to place a mahogany veneer on the top and bottom. Alternating veneers of birds-eye maple and mahogany were then glued using hot hide glue with an iron and veneer hammer. The perimeter of the table was inlaid with alternating pieces of ebony and holly placed in a rabbit. The table top has a center inlay of curly maple and black dyed veneer. 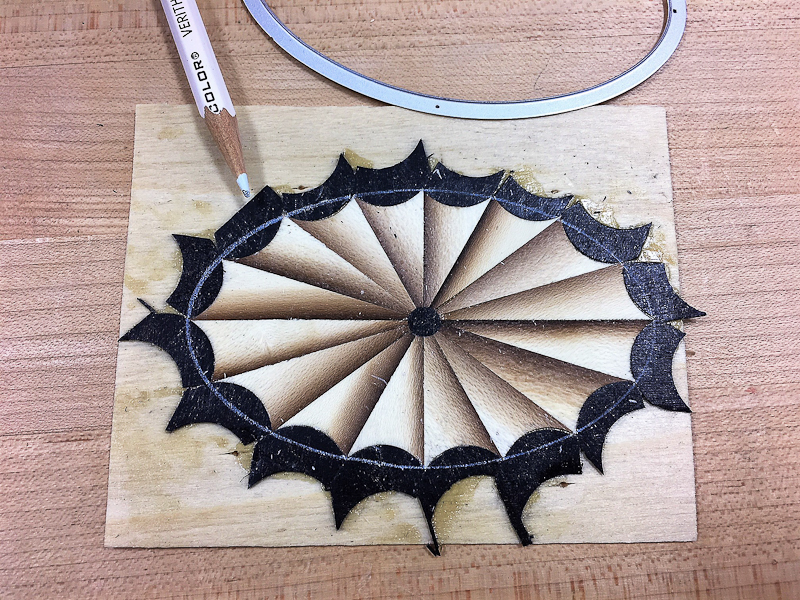 Next up was Joe Kunzman’s demonstration of the making of a federal period oval fan inlay. It consisted of 16 holly veneer segments which were sand shaded. Joe chose 1/40” commercial veneer. The process started with assembling 4 quarter fans. Each quarter fan is made from 4 pie-shaped segments with differing angles. With the angles cut to 17, 20, 24, and 29 degrees, the width of each segment at the oval’s perimeter are identical. Joe made a simple jig to cut the 4 angles quickly and accurately. Next the quarters are squared off and assembled into a fan with veneer tape. A hole was cut in the center of the assembly with a #9/7 gouge to accept a round berry made from black died veneer. Next, an oval was drawn onto the assembly using a template. Using a #8 gouge, he then cut an arc from each segment at the oval’s perimeter forming scallops for the background. Pieces of black dyed veneer were cut to width and trimmed with the same gouge. The resulting pieces, which resembled a half moon, were then taped into the scallops. The veneer tape helps pull the veneer pieces tight together as it dries. The assembly was then attached to backer veneer with hide glue and allowed to dry in clamps. All that was left is to redraw the same oval again, cut out the assembled inlay on a bandsaw, and sand the edges to the pencil mark.

The husband and wife team of Martin and Sharon Goodwin demonstrated the building of a Lebanon #6 chair based on the first he built at Marc Adams with Kerry Pierce. Martin starts with the best, most figured wood he can find. The chair begins with a set of story sticks of each individual part. He used an extra set of the back legs that were turned, and steam bent by Kerry Pierce, in class. He then showed examples of shaped and steamed bent slats, turnings of the front legs, and the seat and show rungs. There are three rungs for the front, three rungs for each side, and two for the backset. Martin built jigs for drilling the proper angle for jointing the front, sides, and back rungs. Thorough sanding of all pieces is a must. Martin and Sharon then assembled the front legs, the back legs with slats, and brought both “ladder sections” together with the sides. Squaring the chair and attaching the arms is then done, before applying several coats of finish. Sharon then, demonstrated the caning of the seat. The caning was a three over three under design resulting in a herringbone pattern. Martin helped; two sets of eyes are needed to keep the pattern on track. After completing the seat caning, the rockers are attached. 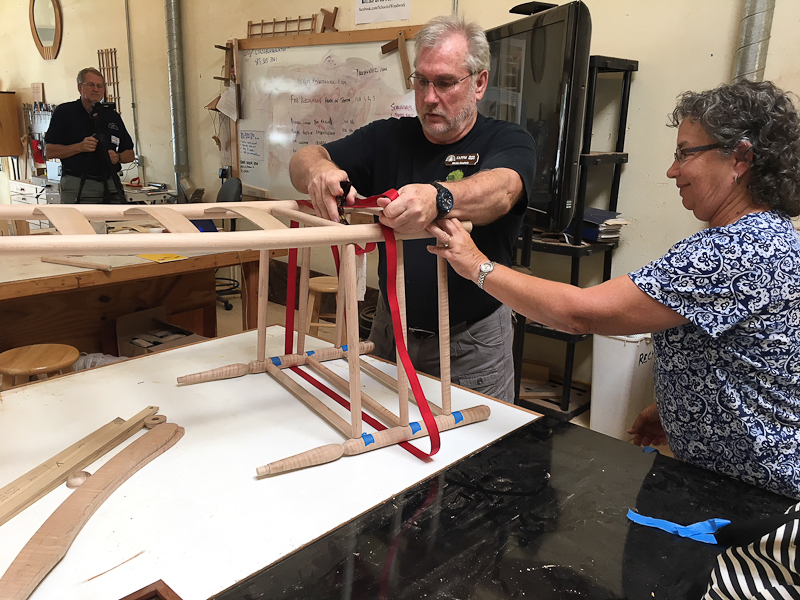 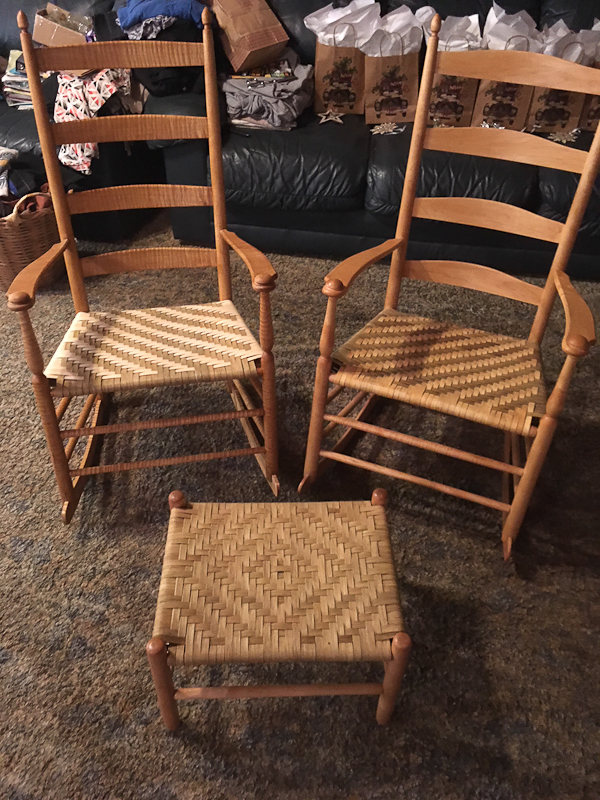 Craig finished up with a demonstrating the technique for placing veneer using hot hide glue with an iron and a veneer hammer. Robert Millard demonstrates the same technique in many of his videos. The advantage of this technique is that it allows placing the veneer with hide glue without clamps or placing hide glue on the top of the veneer as is done with traditional hammer veneering. After hide glue is placed on the substrate, the veneer is placed then slighted wetted with water and secured with an iron on low heat which reactivates the hide glue. The veneer hammer then can be used to push any excess hide glue to the edges of the veneer ensuring a secure bond. A solid wood core can be used as a substrate with quarter-sawn wood or creating quarter-sawn oriented grain with strips of flat sawn stock turned 90 degrees and glued together. 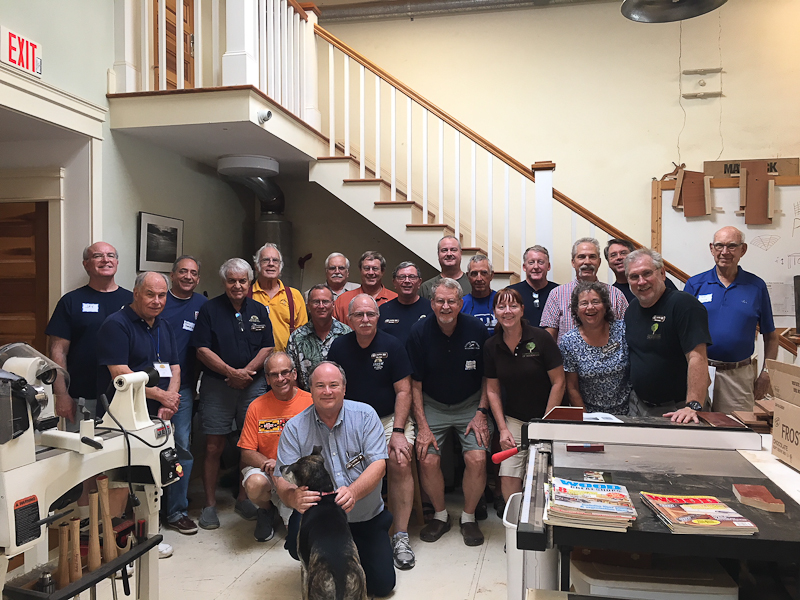