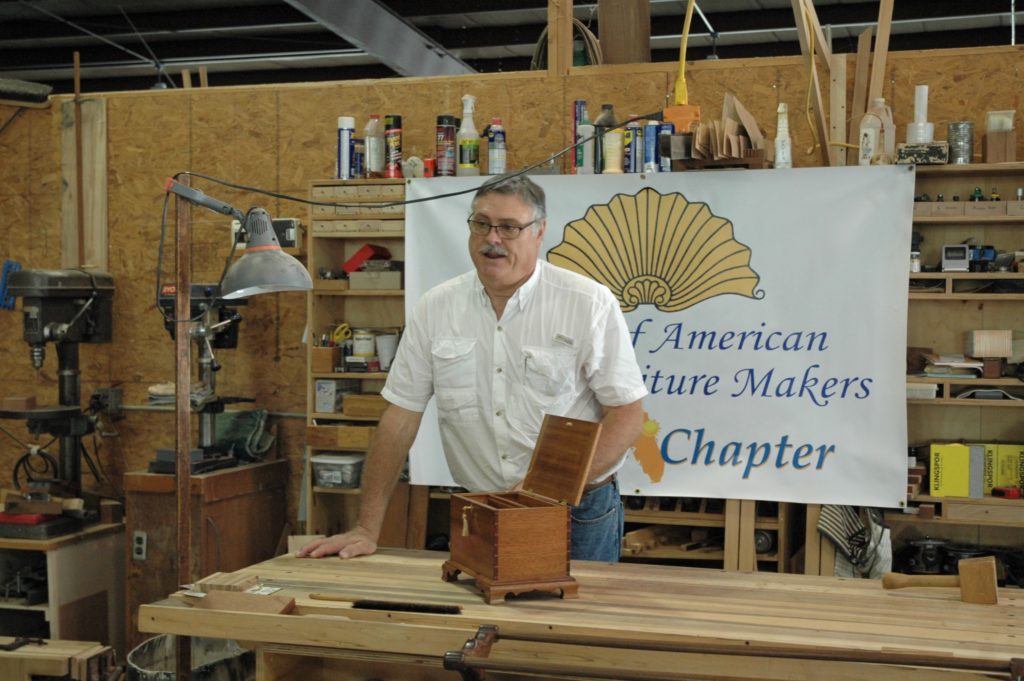 The SAPFM Florida chapter held its fall meeting on Saturday, September 23, 2017 at the shop of Jim Hamer in Lakeland Florida; which is located midway between Orlando and Tampa. We had 18 members in attendance for this 1-day event. Turnout was somewhat low due to Hurricane Irma which hit Central Florida 12 days earlier.

The day’s programs began after a meet and greet and brief announcements. First on the agenda was show and tell. Three of our members presented their works: a jewelry box by John Norstom, a linen rack with spiral columns by John Goyer, and eagle and crucifix carvings by Pete Savickas.

Fall meetings are set aside for presentations by our local members. First was Mike Fucile’s presentation of a federal period Demilune table. He selected sapele for his primary wood. Mike showed us his technique for mortising for the hinges used on the folding table top. Where the legs attach to the table apron, he laid-out and cut tapered mortises. After a discussion of regional differences in the ornamentation of federal period tapered legs between Connecticut, New York, and Baltimore style, Mike focused on the details of his implementation of the Baltimore style. Holly was used for the stringing and a common soldering iron was used for bending the tight radiuses. Bellflowers were cut out with a 5/30 carving gouge. A punch made of brass tubing was used to cut out the berries. Petals for the bellflowers were sand shaded on a propane stove and were progressively arranged closer to one another as they repeated down the leg. His technique for rabbeting a tapered leg for the cuff insured the banding lined up perfectly.

The curved apron was built-up from a lamination of arched cutouts fabricated using a jig on the band saw for uniformity. The poplar assembly was then veneered with matching sapele. The back was attached to the curved apron using dovetails, tails cut first with a specially ground table saw blade. Inlaying the stringing on the curved apron was accomplished with a concave auxiliary base attached to a Stew-Mac Dremel base. Wooden hinges for the rear fold out legs were fashioned from quarter sawn oak.

Next up was Pete Savickas’ presentation on fundamentals of wood carving. Meant to be a 101 level introduction, Pete discussed the best wood choices for carving, including his favorite: English Lime wood. All the basic carving chisels were explained, including sharpening techniques for each. Pete makes extensive use of an auxiliary carving bench clamped to his regular shop bench. This places the work at an ideal height for better accuracy.

Bill Boehm briefly covered his techniques for sharpening and using card scrapers or as he likes to call it “18th century sandpaper”. Before using a crown burnisher to create the hook, he first files the edge flat with a mill file and water sands the sides flat. Bill advocates not using a holder for the card scraper, preferring to hold it directly with his hands so that he can detect and avoid over heating the metal leading to premature dullness. He will switch to another scraper before this happens, keeping several on hand. 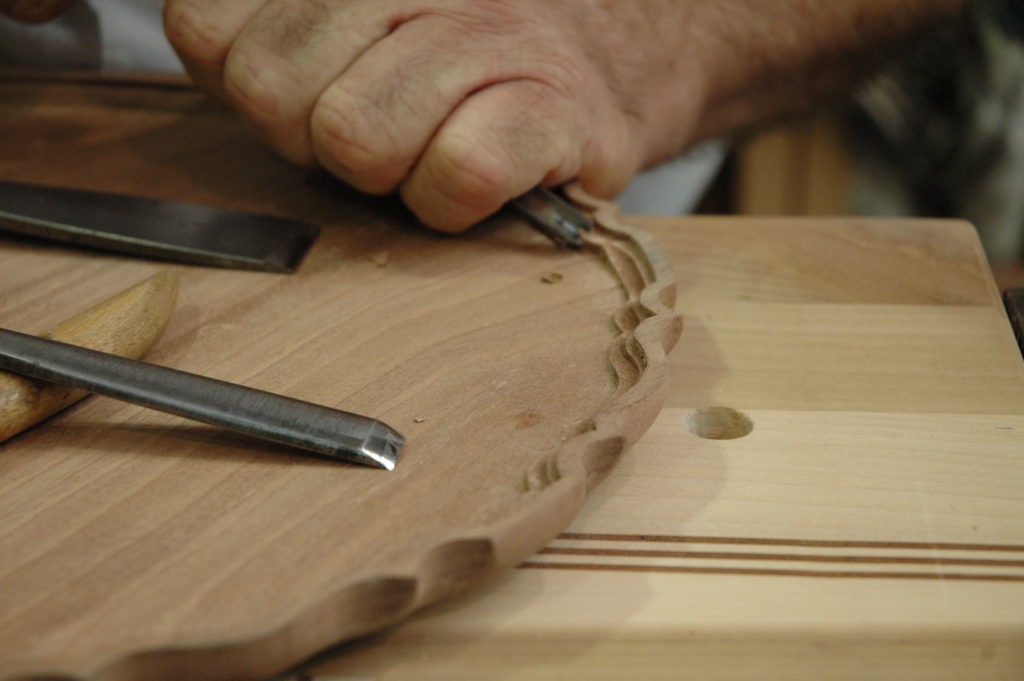 Next, John Norstom demonstrated how to carve a pie crust table top. He starts by hollowing out the field of a round blank on the lathe leaving the edge proud. The curved underside of the edge is then relieved. John used a template, which was cutout on the scroll saw, to layout the scalloped edge. The template represents a small arc repeated along the entire circumference of the table top as its profile is traced onto the wood. The ends of the template are straight and slightly oversized allowing for small adjustments should the arc not divide equally into the circumference. The outer edge of the table top is then cut out on the band saw. A set of dividers is used to repeat the outside profile inward on the lip of the edge. This scribed pencil line is then cut with gouges delineating it from the flat field. Common carving tools are then used to form the curves of the scalloped edge. 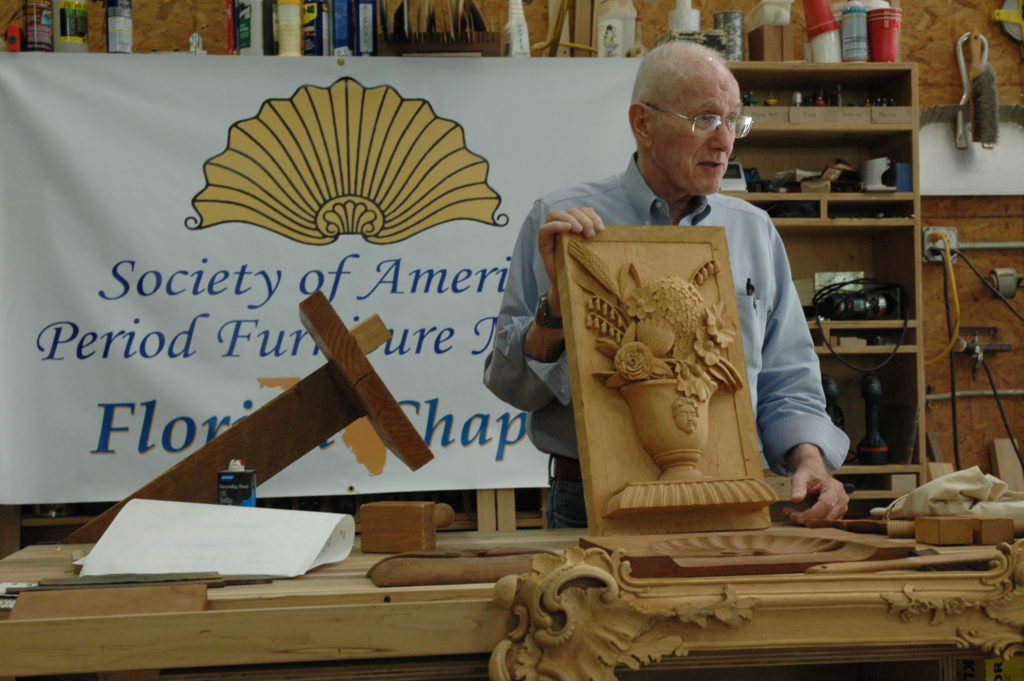 We were pleasantly surprise by the return of a long time member, Art Peters. Most of us have not seen Art for several years while he was caring for his ill wife. Art brought with him a few pieces he has carved lately, notably a basket of fruit and an ornate carved picture frame made for his late wife, an accomplished painter. Art graciously agreed to present on the spur of the moment. He discussed the importance of planning and thinking through a project before starting, but not letting overthinking hinder you. His advice for sharpening carving tools is to never create a micro-bevel on carving tools and always finish with stropping the tool on leather loaded with jeweler’s rouge. 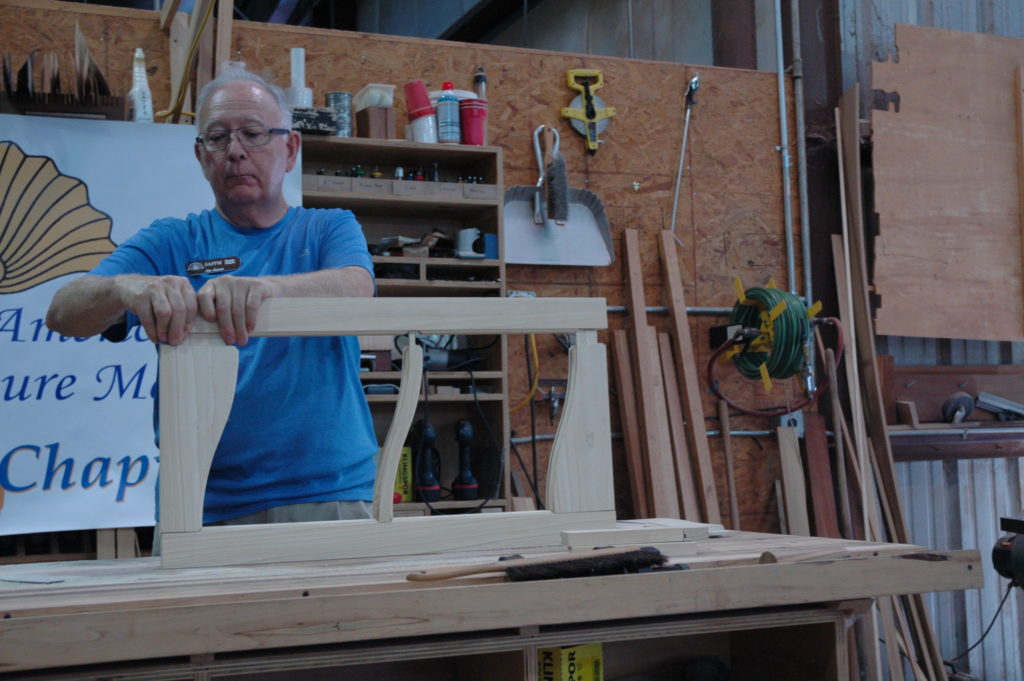 Jim Hammer finished up the day with his presentation on building doors with curved rails and mullions. He starts by cutting all tenons while the stock is still square. After that, the curves are cut out on the band saw and sanded. Using a router equipped with pilot bearing cutter, he cut ¼”round-over beading on the inside fronts of all the pieces. Next, the grooves for the panels are cut on the shaper. Using a band saw, he clipped the beads at a 45-degree angle where they meet at corners.