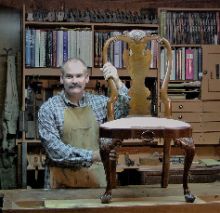 More than 40 years ago,starting at the of age 14, Ray’s passion for woodworking and furniture making was already evident and has grown more intense as the years have passed. Mostly self taught, Ray is none the less very quick to praise those who have inspired and taught him along the way, including his father, a master finish carpenter; Chuck Lammers, his shop class teacher; Ben Hobbs, 2011 Cartouche Award recipient; and Pierre Restelli, a master carver from Portsmouth, VA.

Between 1988 and 2013, Ray was pursuing two careers, simultaneously. He served his city as a fireman and his state and country as part of various FEMA teams. When not on duty, he created more than 200 pieces of museum quality period furniture, for his own use and on commission. Today he produces furniture and teaches out of his shop in Virginia Beach, VA.

Ray’s work has been featured in various newspapers and in local and national magazines.  He has taught fellow furniture makers through out Virginia for 30 years and is tireless in his efforts to increase awareness and appreciation of American period furniture, determined to keep the craft alive into the next generation.