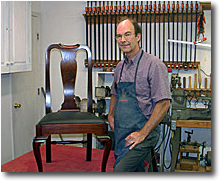 Ben Hobbs has been building period reproduction furniture for nearly 30 years. After teaching high school math for 10 years, Ben's passion for early American furniture and architecture drew him into the shop in 1982. Since then, Ben has operated as a bespoke custom furniture maker reproducing fine early American pieces, focusing on Southern and local NC examples. After training all three of his sons to be accomplished furniture makers, Ben opened his shop doors in 1996 to train students in his woodworking school.