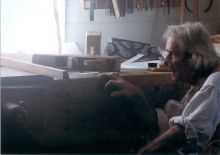 A fourth-generation woodworker, Mack Headley studied the tools and techniques of 18th century furniture making by repairing and reproducing period furniture in the classic traditions. He began woodworking as a teenager during the late 1960s in his father's Clarke County, Virginia, shop. In the late 1970s, Mack began working in the historic Hay's Cabinetmaking Shop at Colonial Williamsburg. He retired from that position in 2013.