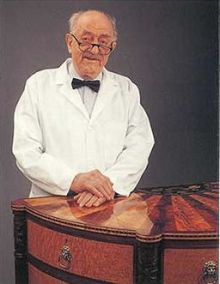 Harold Ionson was the first recipient of the Cartouche Award for lifetime achievement in period furniture from the Society of American Period Furniture Makers. He apprenticed as a cabinetmaker in the Boston shops in the 1930's, was a union carpenter, served in World War II, and then became a patternmaker until his retirement.

After retiring, he became the consumate recreator of John and Thomas Seymour pieces. Harold decided to build the 'Derby' commode, probably the most lavish piece ever built by them.

The original commode was purchased by Elizabeth Derby West  in 1809.  Although credited to Thomas Seymour, the talents of James Cogswell, Thomas Wightman, and John Penniman were instrumental in its construction.

Because of the time spent on all of the jigs and fixtures needed for construction, Harold built nine Derby commodes over a period of twelve years. (He called them 'recreations' because they were not intended to be exact copies.)

His wife Martha used to make bandings with him in the shop.