While the Rococo Period was mainly in Europe the Rococo Revival Period was mainly centered in America. Grandeur would be the single word to describe the revival which hit in several revivals through the 19th century. John Henry Belter is the maker most recognized during this period such that his name became synonymous with the period.

Rosewood was imported from Brazil and East India and used extensively. Many pieces did not survive due to the fragile characteristics of Rosewood. ”As a result, Belter patented a process for making laminated furniture. Laminated wood consisted of a number of veneer sheets bound together with hot glue. The bounded sheets were then bent under steam pressure, pressed into molds, and then carved. The process produced stronger pieces of furniture that was less costly than traditional carving and allowed for mass production.”https://en.wikipedia.org/wiki/Rococo_Revival This allowed for intricate but lighter “carvings” which were steamed in molds rather than carved. This is the beginning of industrialization in furniture making.

Some refer to this as the Naturalist style as the technology advances allowed for finer details and more extensive carving in natural forms such as fruits, leaves, and flowers. The timeframe for the Naturalist style is 1850-1914 – slightly longer than the Rococo Revival normally sighted.

Here are a few examples of Rococo Revival Period furniture.   Click on any image to zoom in. 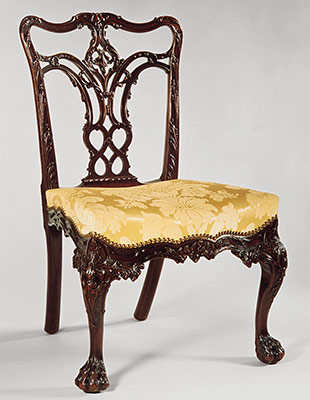 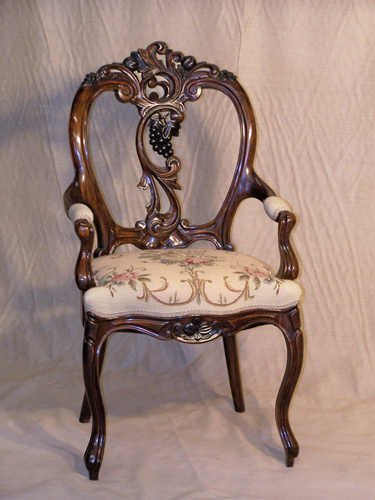 View Member Made Rococo Revival pieces from our Gallery >