Federal Period is the first truly American style of furniture; co-incident to Neo-Classical in England and Louis 16th in France. Introduced during the Federalist period, from the desire to break from the hold of England through independence and beyond. See https://books.google.com/books?id=uvQNEISK82AC&printsec=frontcover&dq=Federal%20furniture&client=firefox-a#v=onepage&q=Federal%20furniture&f=false

Stylistically, balance and symmetry were extremely important. Furniture was orderly and geometric, the edges were sharp and crisp. Architectural elements, shapes, and proportions moved from buildings into furniture design. Legs tapered increasing the visual elegance and lightness of the piece as compared to earlier styles.

The sideboard, tamboured desk with cubbyholes and hidden compartments, the card table, dressing table and worktable were introduced during this period. Desks went from portable to stationary and the office chair developed with the seat turning on a circular platform; it is the first recorded swivel chair. Bookcases and cabinets with glass doors made their appearance. Upholstery was beginning to be featured, and while cushions tended to be thin, the use of upholstery for comfort is introduced. Beds were square or rectangular with four high posts (later two were attached to a wall) which supported a canopy.

Makers durning this period created styles in their own right include Hepplewhite, the Seymours, Sheraton, Adams, Duncan Phyfe, Lannuier, Goddard, Townsend, Affleck, and McIntire. While not all were working in America, their writings and teaching greatly influenced the Federal Style. Carvers such as Hercules Courtenay, Nicholas Bernard, and John Pollard worked alongside the furniture makers to create the American Style.

In France and later elsewhere the tasks to create furniture became specialized and strictly divided. Interior decorators made their debut.

Sheraton Style was named after Thomas Sheraton by dealers and collectors in the 19th century. Unfortunately, he died in poverty having not achieved personal success with his designs during his lifetime even though his designs were the most reproduced of the period. No piece has ever been found which can be positively attributed as his work. His books defined the style hence the attribution.

“The Furniture Designs of Thomas Sheraton” https://archive.org/details/furnituredesigns00sheruoft is a republication of the furniture plates of his two books.

He also wrote “The Cabinet Dictionary” and “The Cabinet Maker, Upholsterer and General Artist’s Encyclopaedia”.

John (father) and Thomas (son) Seymour moved from England to Maine in 1784. They were virtual recluses in Maine and very little is known about them. At some point Thomas moved to Boston where he was involved with many furniture shops. In 1819, he began working for Isaac Voss & Son as foreman of his shop in Boston. Seymour was responsible for the overall design, look, feel, and execution of the furniture produced in the shop with designs identified as his by unique labels used by the Voss shop during his tenure.

While the style is identified as Seymour, many contributed to the overall execution. Seymour was known for his decoration especially veneering and others in the shop were responsible for the precision in assembly. Thomas Wightman was their master carver and created intricately carved moldings which Seymour was known to employ on casework.

Seymour created a technique to fasten the molding to the casework in a shallow groove. This allowed the molding to remain attached to the piece during movement of the wood.

There was a huge revival of Seymour designs and techniques during the 1920’s but the Voss label identifies the originals.

While no known pieces created by George Hepplewhite are known to exist, he greatly influenced the style of the time.

He was based in England, but his designs and influence came to the new world when his wife published over 300 of his designs posthumously in the “Cabinet Maker and Upholsterer’s Guide” – a full text can be found https://archive.org/details/cabinetmakerupho00ahepuoft, His timeframe begins in 1775 in England, but the style wasn’t seen in the US until 1790.

Duncan Phyfe was a maker born in Scotland. He emigrated to the US and was a joiner in 1793. In 1794 he called himself a cabinet maker and opened shop in New York and changed his name from Fife to Phyfe. He was known as the “United States Rage” and served the nation’s wealthiest and most prominent families. Both Duncan and his sons Michael and James were cabinet makers defining this style and they trained many – over 100 hundred journeymen were employed during the height of their shop. He retired in 1847 at the age of seventy-seven. The years listed for the Style are the peak most prolific years of his shop. The shop closed in 1847.

He never created a new or unique style, but drew from existing styles such as Neo-Classic, Sheraton, Regency, and later the Empire styles to create a distinctive look and feel – some say he took them to their natural conclusion – see Charles Cornelius’ “Furniture Masterpieces of Duncan Phyfe” https://archive.org/details/furnituremasterp00corn for additional examples and details. The Duncan Phyfe style is characterized by perfect proportions, balance and symmetry. Styling is restrained and graceful. It became known as the New York local style. In the 1920’s many furniture companies revived his style and replicated his pieces for decades.

Two Quaker families who settled in Newport, Rhode Island. The families intermarried and created a furniture dynasty which covered 120 plus years by 21 cabinet-makers. John Townsend and John Goddard were second generation cabinet makers and brought fame to the families. Their style became the basis for the Newport Style since others in the same area trained under or copied their design elements.

Many unique features and motifs are found in Newport Style furniture. The Goddard Block Front Chest first called the Block-and-Shell was a block front chest capped by a carved shell in an alternating concave and convex pattern. The shell is not unique to Goddard, as Grindal Rawson and Benjamin Baker also incorporated the carving. The distinct ball and claw foot emerged in the Newport Style – where the talon is highly carved and life-like. Goddard’s signature foot has a knuckle on the back claw.

Here are a few examples of Federal furniture.   Click on any image to zoom in. 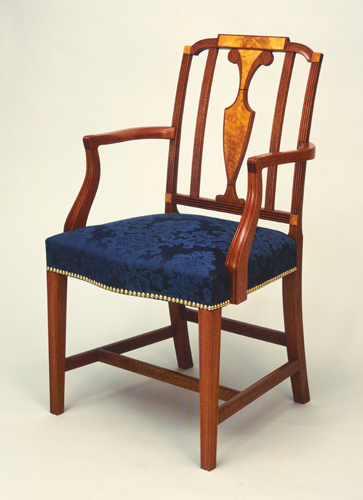 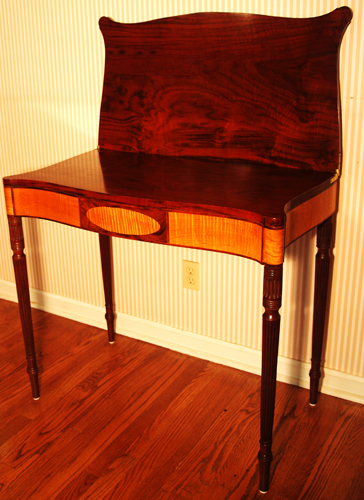 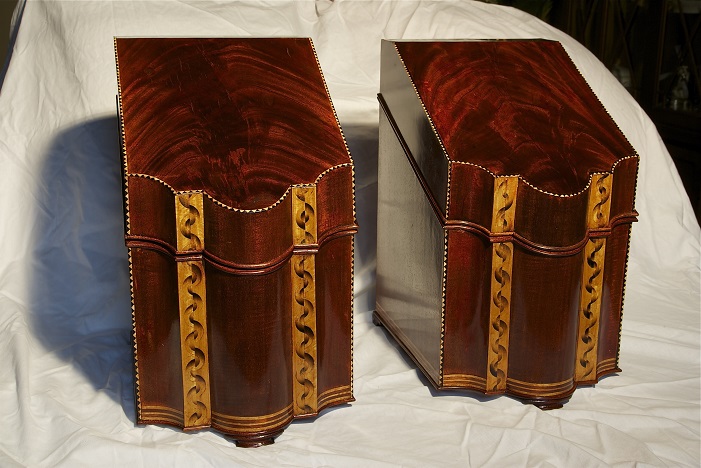 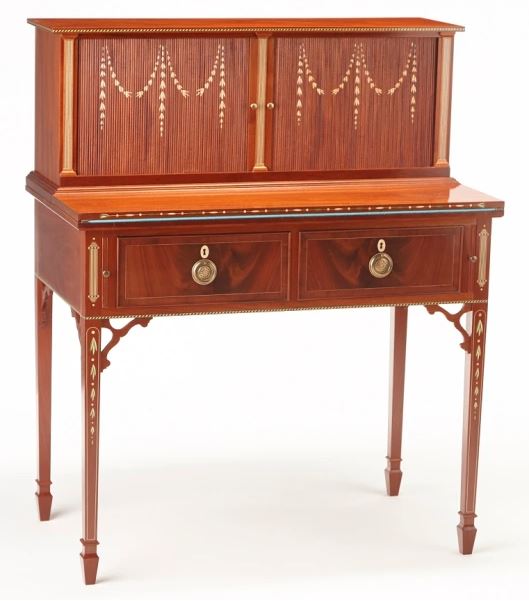 View Member Made Federal pieces from our Gallery >