Menu
Log in
Register
Install the app
You are using an out of date browser. It may not display this or other websites correctly.
You should upgrade or use an alternative browser.

We moved my 92-year-old father-in-law to an apartment this summer and I ended up with his Union Tool Chest. He apparently got it years ago after a co-worker passed away. I've polished all of the nickel-plated parts, removed all the felt drawer liners, obtained missing corner supports (identical to old style Gerstner corners still available at the Gerstner web store), and scrapped the varnish off. I'm at the staining and re-finishing stage.

Unfortunately, the lock key is missing. I think I can make a new key with some time and effort, but I was wondering if anyone out there has a similar era Union chest who would be willing to send some pictures and dimensions of their key as reference. And then there is the far-out possibility that someone would have a chest with the same keyed lock (not holding my breath). Based on remnants of a decal on a drawer I date this chest between 1918 and 1928, but the same style lock may have been used later. The inside face (flat side) of the lock is stamped "44" which would define the key.

I'm including some before and in-process pictures for fun!

I'm afraid I can't help with your search for a key, but wanted to compliment you on the improvement in your in-process photos!
M

you could take the lock body apart and cut a new key, or remove/disable/modify the plates to just use a generic key or "screwdriver" to turn the lock...or plug the existing mortice and recut it for a new lock and key?

I have a similar tool chest. 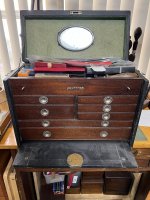 The key is steel 0.040" thick. You may be able to use the scale to sort out dimensions or I can make measurements if needed. 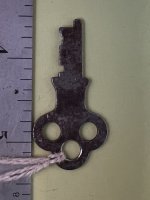 Thanks - this is awesome!

I finally got working on the key. I started with your picture and scaled it in my CAD program. I then went through 4 design trials to get the depths and widths of the cut-out to fit. I was pretty amazed I could actually move tumblers with the keys gown on my little 3D printer. The last trial got everything zoned it and I can actually function the lock with the grown key! Next will be some minor adjustments then I'll have a plastic key to glue to some 0.040" stainless steel I found.

Would you be able to send a photo of your lock with the key installed? Something seems off on mine (see picture).

I was able to find a reproduction Union Tool Chest Decal for this era chest on eBay. I'm very happy with it. Only thing left is to releather the handle. Never done anything like that but found a great YouTube video on leather stitching!

(FYI I tried sending this as a one-on-one conversation. However I couldn't figure out how to attached pictures. When I tried it was asking for a web site??)

Hope these help. One locked, one unlocked. 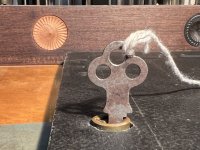 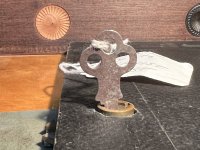 Troy, that's exactly what I needed. It explains the large notch near the finger tab. I thought the "flange" sat on the top of the lock.

I completed the restoration of my 100 year old Union Tool Chest.

Nice job! I'm curious about the decal. How did you reproduce this?

Thanks. Believe it or not, I found it on eBay! Someone reproduced several of the various Union Tool Chest labels. It wasn't cheap, but after all the work restoring the chest I figured it deserved it. I was very impressed by the qualiy, and am glad I did it.

In hind site these tool chests are so very basic in their construction it would almost have been as easier to build one than restoring it. You can get leather handles, corner protectors and locks from Gerstner. However I do like the history that comes with an old tool chest.

I'm excited to show the tool chest to my father-in-law. I hope he doesn't want it back!!