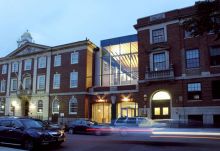 Founded in 1885,  the North Bennet Street School was one of the first institutions for industrial arts in the US.  Since its founding in 1885, NBSS  has adhered to its mission of teaching individuals to master a useful trade, earn a living in their field, and maintain a high level of craftsmanship by combining traditional hand tool skills with the latest technologies.  In addition to furniture making and cabinet making, NBSS offers programs in carpentry and  preservation carpentry, violin making and repair, piano technology, jewelry making and repair, locksmithing, and bookbinding.

Notable NBSS graduates include Cartouche Recipients Will Neptune and Phil Lowe, as well as Lance Patterson and Steve Brown.

NBSS is accredited by the Accrediting  Commision of Career Schools  and College Technologies (ACCSCT).  ACCSCT is an institution devoted to maintaining educational excellance and integrity in post-secondary career schools and colleges in the United States and Puerto Rico.