A walnut repair to the right hairy paw foot of the bedstead is consistent with a repair carried out by William Savery documented August 3rd 1772,“To mending the post of a bedstead” to which he charged 1 shilling. This is comparable with the charge for a complete claw foot of 2 shillings, documented in The 1772 Philadelphia Furniture Price Book. 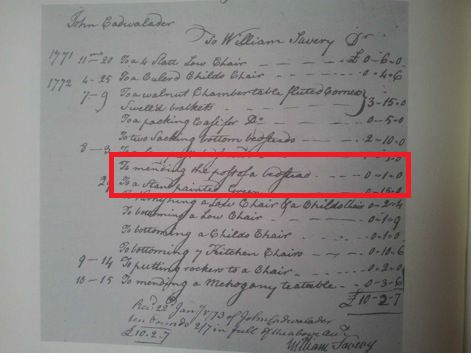 One post which still retains a section of sapwood has suffered damage from a castor coming loose, a section of the carving has broken away necessitating a repair. It is difficult to envisage a repair of this magnitude being anything other than to the most vulnerable area of the bed, the foot, especially for such a new and highly prized bed. If the Savery repair was to similar damage on a Marlborough leg the charge would have been minimal. 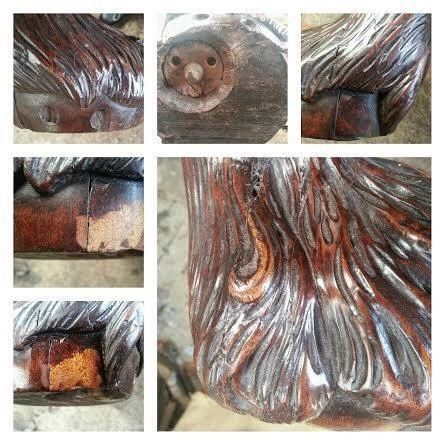 Walnut repair to right foot post of the bedstead.

This is a very old repair, the timber being glued then held with five screws, three of which are neatly covered with timber plugs. The patch has then been carved to match the existing hairs of the hairy paw. The repair is done in walnut, not mahogany.

As stated by Nicholas Wainwright, Cadwalader purchased furniture from William Savery costing £61.19s. “It was mostly of walnut and largely for the bedrooms”.11 This would correspond to his repair carried out in 1772; “To mending the post of a bedstead”.