Documentary evidence shows that both Thomas Affleck and Benjamin Randolph supplied beds to the Cadwalader family from 1769.1 John Cadwalader married Elizabeth Lloyd in September 1768. A usual priority for a newlywed couple is the purchase of the marital bed. It is documented that by the following year Cadwalader was purchasing some of his finest furniture from Benjamin Randolph.

It is entirely possible that Randolph supplied the Cadwalader marital bed between 1768-69 and it was part of the furniture included in the £94.15 payment made by Lambert Cadwalader on his brother’s behalf. Unfortunately there is little documentary evidence for Randolph’s furniture. "The record being limited to a bill of September 26th, 1769, for a high post bed, a set of window cornices, iron rods and hooks and a payment of £94.15 made on October 10th 1769: “B. Randolph acct for furniture, £94.15.”2

In fact, the Randolph bill of 1769 reveals that this particular Randolph bed was a painted one for Dr Thomas Cadwalader and not General John Cadwalader as previously assumed by Nicholas Wainwright.3

The 1769 bill to Dr Thomas Cadwalader shows that Randolph was producing beds of the same construction as seen on the principal bed of John and Elizabeth Cadwalader, with ‘iron hooks and rods’ rather than a pulley system, and central to Randolphs’ trade card of 1769-70 is an ornate bed showing a claw foot with turned vase. In further distinguishing between the workshops of Affleck and Randolph we also find tool marks directly comparable to those found on commissions attributed to Randolph for General John Cadwalader. 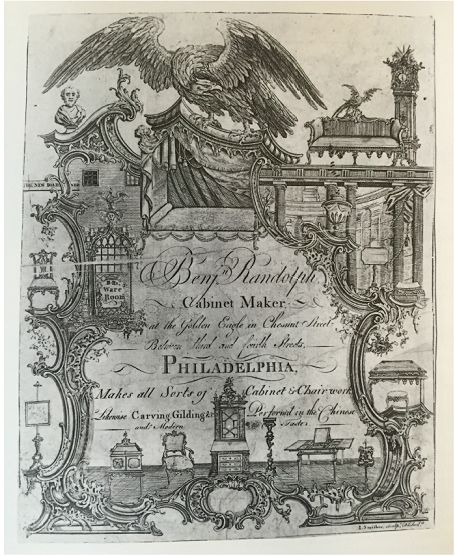